I usually do this post at the beginning of the month, but very honestly: I completely forgot. But I figured better late than never! So here I am, letting you know what book releases I’m most looking forward to this month. And by now, some of these are already out, so you can access them right away!

I’ve actually already gotten to read all of these books, and I promise you they are amazing! I can’t wait to pick up my own copies, because I definitely need these on my shelves.

DISCLAIMER: I researched the release dates when writing this post, but I can’t 100% guarantee that they’re accurate, because a lot of release dates have changed and are changing.

Elizabeth Acevedo – Clap When You Land

In this novel in verse, Camino Rios lives for the summers when her father visits her in the Dominican Republic. But this time, on the day when his plane is supposed to land, Camino arrives at the airport to see crowds of crying people… In New York City, Yahaira Rios is called to the principal’s office, where her mother is waiting to tell her that her father, her hero, has died in a plane crash.

Separated by distance—and Papi’s secrets—the two girls are forced to face a new reality in which their father is dead and their lives are forever altered. And then, when it seems like they’ve lost everything of their father, they learn of each other.

This was once again a beautiful Elizabeth Acevedo book, and such a beautiful verse novel. I believe the author narrated the audiobook again, so I would very much recommend that – I already can’t wait to reread it!

Kacen Callender – Felix Ever After

From Stonewall and Lambda Award-winning author Kacen Callender comes a revelatory YA novel about a transgender teen grappling with identity and self-discovery while falling in love for the first time.

Felix Love has never been in love—and, yes, he’s painfully aware of the irony. He desperately wants to know what it’s like and why it seems so easy for everyone but him to find someone. What’s worse is that, even though he is proud of his identity, Felix also secretly fears that he’s one marginalization too many—Black, queer, and transgender—to ever get his own happily-ever-after.

When an anonymous student begins sending him transphobic messages—after publicly posting Felix’s deadname alongside images of him before he transitioned—Felix comes up with a plan for revenge. What he didn’t count on: his catfish scenario landing him in a quasi–love triangle….

But as he navigates his complicated feelings, Felix begins a journey of questioning and self-discovery that helps redefine his most important relationship: how he feels about himself.

Felix Ever After is an honest and layered story about identity, falling in love, and recognizing the love you deserve.

This is such a special book, and it really resonated with me. Without a doubt, this is one of the most important YA releases of the year. I can only hope that many people will pick it up.

S.K. Ali & Aisha Saeed – Once Upon an Eid: Stories of Hope and Joy by 15 Muslim Voices

Once Upon an Eid is a collection of short stories that showcases the most brilliant Muslim voices writing today, all about the most joyful holiday of the year: Eid!

Eid: The short, single-syllable word conjures up a variety of feelings and memories for Muslims. Maybe it’s waking up to the sound of frying samosas or the comfort of bean pie, maybe it’s the pleasure of putting on a new outfit for Eid prayers, or maybe it’s the gift-giving and holiday parties to come that day. Whatever it may be, for those who cherish this day of celebration, the emotional responses may be summed up in another short and sweet word: joy. The anthology will also include a poem, graphic-novel chapter, and spot illustrations. 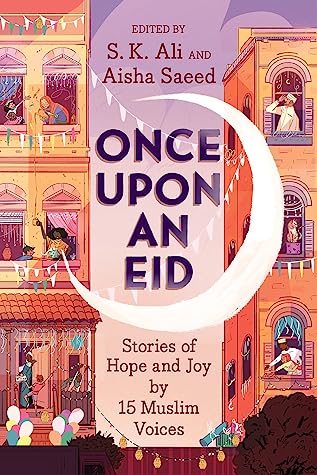 I’m currently reading this anthology because I wanted to read a few books by Muslim authors since it’s currently Ramadan. I’m having a lot of fun with it; it’s so great to get some insight into what it can be like to celebrate Eid!

When Dimple Met Rishi meets Simon vs. the Homo Sapiens Agenda in this rom com about two teen girls with rival henna businesses.

When Nishat comes out to her parents, they say she can be anyone she wants—as long as she isn’t herself. Because Muslim girls aren’t lesbians. Nishat doesn’t want to hide who she is, but she also doesn’t want to lose her relationship with her family. And her life only gets harder once a childhood friend walks back into her life.

Flávia is beautiful and charismatic and Nishat falls for her instantly. But when a school competition invites students to create their own businesses, both Flávia and Nishat choose to do henna, even though Flávia is appropriating Nishat’s culture. Amidst sabotage and school stress, their lives get more tangled—but Nishat can’t quite get rid of her crush on Flávia, and realizes there might be more to her than she realized.

There’s been a lot of buzz surrounding this debut, and it’s so well deserved. It was a fairly heavy book at times, between Nishat’s family’s homophobia, the racist bullying Nishat deals with at school, and her being outed at school, so please be aware of that. But it also had many cute moments, and I really enjoyed it.

From the author of the acclaimed Jack of Hearts (and other parts) comes a sweet and sharp screwball comedy that critiques the culture of toxic masculinity within the queer community.

This year, though, it’s going to be different. Randy has reinvented himself as ‘Del’ – buff, masculine, and on the market. Even if it means giving up show tunes, nail polish, and his unicorn bedsheets, he’s determined to get Hudson to fall for him.

But as he and Hudson grow closer, Randy has to ask himself how much is he willing to change for love. And is it really love anyway, if Hudson doesn’t know who he truly is?

Review to come soon!! But just… please preorder this, it’s one of the queerest things I’ve ever read and it’s truly amazing.

11 thoughts on “Most Anticipated Releases of May”