I was kindly sent a copy of Fin & Rye & Fireflies by Harry Cook by the publisher in exchange for my honest review.

“It started with a kiss…as love stories often do. Jesse Andrews had the arms of a Greek god and he was on the track team. The night of our kiss fell on a Friday.”

Then, only a few days later, Fin’s world is turned upside down – and not in a good head-over-heels-in-love way – when Jesse cruelly outs him. An event which ultimately leads to his family leaving town.

But a fresh start isn’t going to change the truth of who Fin is. And it’s not going to stop his sexuality causing everyone all sorts of problems. Everyone, that is, apart from his new best friend Poppy, her girlfriend-in-waiting June, and his new crush Rye… So, while Fin and Rye are enjoying some seriously intimate moonlit moments together, Fin’s parents decide to pack him off to the local ReSouled ‘therapy camp’.

It’s a nightmare – and there’s no easy way out. Can Fin’s squad hatch a plan outrageous enough to spring him before the ‘conversion’ acolytes force him into the straight and narrow? 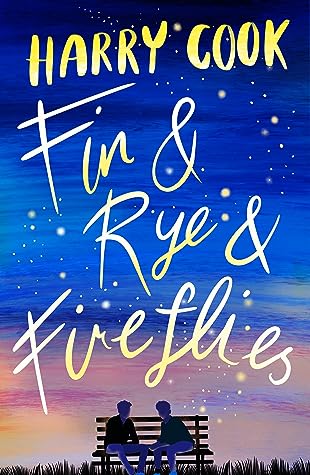 I definitely felt the fireflies while reading this novel.

Before reading, I looked up what it was about, and knowing it dealt heavily with homophobia and conversion therapy, I was afraid it would be a very heavy read. It’s really a testament of this book that it wasn’t. Yes, it does deal with heavy topics like conversion therapy and homophobia from parents, but there’s also a lot of fluffy, wholesome content, and overall I found that the book had a great balance because of that between talking realistically about difficult things LGBTQ+ teens can deal with while also just sharing an incredibly lovely love story.

I found this book hard to put down and read most of it in one sitting, and while I felt so immersed and the story was mostly so heartwarming, I do have to admit I had a little more trouble reading the past 90 pages of the book or so. This is the part that deals the most heavily with conversion therapy, and it’s also the part where Fin’s parents have to start seeing sense and come around. Seeing as this was a fairly short part of the book, I found this all a little rushed, and I would have liked to see it paced out more.