Jack of Hearts (and Other Parts) has become one of my favourite LGBTQ+ YA books, because it’s open and inclusive. It’s an honest, sex positive conversation with queer teens, making it a safe space for them to read and learn. I had high hopes for Camp, L.C. Rosen’s new release, to be similarly fun and educational. And it’s safe to say those expectations were even exceeded, as this is sure to be one of my favourite LGBTQ+ releases of the year. Read my 5 star review below to learn more about this amazing book!

I received an ARC of this book from the publisher, in exchange for my honest review.

From the author of the acclaimed Jack of Hearts (and other parts) comes a sweet and sharp screwball comedy that critiques the culture of toxic masculinity within the queer community.

This year, though, it’s going to be different. Randy has reinvented himself as ‘Del’ – buff, masculine, and on the market. Even if it means giving up show tunes, nail polish, and his unicorn bedsheets, he’s determined to get Hudson to fall for him.

But as he and Hudson grow closer, Randy has to ask himself how much is he willing to change for love. And is it really love anyway, if Hudson doesn’t know who he truly is? 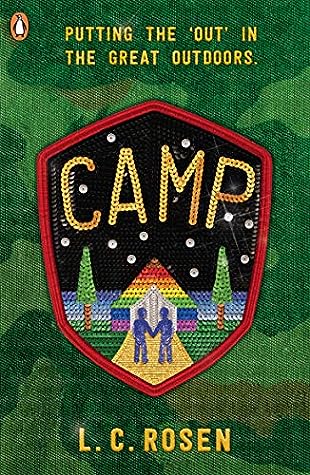 Lev Rosen is the king of writing books that queer teens need to read. Jack of Hearts (and Other Parts) was educational in the funnest way possible, without ever getting preachy, and I had high hopes for Camp to be similar.

This book broke my heart right away, because it introduces us to Randy, who feels like he has to change who he is to be seen as attractive by the boy he crushes on. He knows that this boy is only into masculine guys, so Randy tries to adopt an alter ego who’s very masculine. With this, the book delves into something I think a lot of queer people struggle with, and that’s gender expectations. Randy has to work through a lot of internalized shit throughout the book, stuff that’s rooted in toxic masculinity and internalized homophobia and the expectations that gay culture puts on guys (although of course everyone is affected by toxic masculinity), like how they all have to be a certain type of gay guy based on their appearance and the way they act, and how there’s a big focus on finding a certain type of person based on traits and appearance rather than just a person you find attractive and click with.

Overall, I’m so impressed with how much the author delved into gay culture and the toxic aspects of it. I love how he shows that there’s so many different ways to be queer, and by that, he’s consciously created a safe space for all queer people, including, for instance, people on the asexual and aromantic spectrum and non-binary people. I really appreciate that, as an aroace non-binary person.

Something I especially loved is how no one interferes with the ways Randy changes. They do voice their concerns, but in a very respectful way. No one oversteps. And they all seem to respect that this is ultimately something Randy needs to figure out himself.

Right from the very first page, this book did so many important things. I love how it destroyed toxic masculinity in such a kind and nuanced way, without villanizing Hudson, the love interest. Because there are a lot of queer kids like Hudson and they deserve to be treated kindly. They’re not bad people because of internalized bullshit they never asked for.

Read this book for a love letter to the queer community in all its diversity. There’s just something so special about reading about a queer summer camp for teens if you consider that a lot of the time, these types of camps would be conversion camps, rather than the safe space Rosen created in the pages of this book. Camp Outland is a big “fuck you” to those. The teens here get a four week vacation from any kind of homophobia and transphobia in their lives, they get queer camp councillors who introduce them into queer culture and queer history, and everything a queer teen would need to know, on top of giving them a space where they can meet other teens like them.

Is this book on your TBR?