I don’t normally reach for zombie thrillers, but you might know by now that I’ll read any genre, especially if it’s gay.

Which is also why I was sent a physical review copy of Wranglestone. I’m very grateful for that, as international readers don’t get sent physical copies a lot.

The book came with a lovely author letter, in which the author said he wanted to give LGBTQ+ teens their own adventure, because that was exactly what he needed growing up. I can only say I think he nailed it.

Winter was the only season every Lake-Lander feared…

In a post-apocalyptic America, a community survives in a national park, surrounded by water that keeps the Dead at bay. But when winter comes, there’s nothing to stop them from crossing the ice.

Then homebody Peter puts the camp in danger by naively allowing a stranger to come ashore and he’s forced to leave the community of Wranglestone. Now he must help rancher Cooper, the boy he’s always watched from afar, herd the Dead from their shores before the lake freezes over.

But as love blossoms, a dark discovery reveals the sanctuary’s secret past. One that forces the pair to question everything they’ve ever known.

An action-packed and thought-provoking debut, for fans of Patrick Ness, Marcus Sedgwick, DREAD NATION and The Walking Dead. 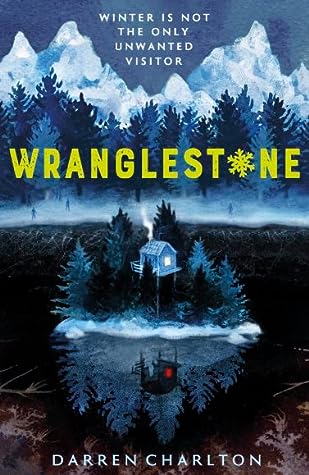 This book was off to a good start right away. After only reading a few pages, I was already completely drawn in and I found it so suspenseful.

And honestly, this didn’t stop for the remainder of the book. I was immediately hooked and found it pretty much unputdownable. It was very difficult to get through my work day while just wanting to get back to my book.

I truly loved the voice of this novel, which made the main character so endearing. Normally in a book like this, I’ll have trouble connecting to the main character because they’ll be so much more… capable than me. And that’s precisely what I loved about this book: the main character is young and naïve, and he’s kind of clueless, at least at the start of the book. Because of that, as a reader, you really take the journey with him. And it’s much easier imagining yourself in a similar position.

The voice of the book also made the romance work really well. It’s a sort of rough voice at first, because this is a rough world to live in, but there’s a lot of softness beyond the surface, which made the romance really stand out for me, and there were multiple fragments that really spoke to me.

“Peter felt a surge in his heart like it had suddenly been granted more strength or heat somehow. He’d never known that feeling before, but he recognized what it was at once. It was the presence of someone else being there.”

“There’s only one a you in the whole wide world, Peter. And there’ll only ever be one a you. So what are the chances that you lived in this time? Not before, but right now and at exactly the same time as me. What are the chances of that? I’m grateful as all hell and you’ll get no more worries from my pa or anyone else for that matter. Not now, not now you’s with me. I’m glad you wasn’t born before. I need you here. So I reckon this time suits you just fine, Peter. OK?”

While this book was very suspenseful, I didn’t think it was scary. In that sense it was just the right amount of suspenseful and gory for me: enough to keep me hooked, but not enough to make me afraid in the dark. One thing that really aided the eerie atmosphere of the book was the world building, which I can only describe as narrow. The story is set in a very small community, in a relatively small area, and we don’t get to know a lot about the rest of the world and the surroundings. This makes sense, because there’s no such thing as the internet anymore, and there’s also no safe way to travel large distances.

I only have one small criticism. Something I do have a hard time understanding is when a fictional world doesn’t have homophobia, but it does have misogyny and toxic masculinity. This just seems unconvincing to me, because homophobia is ultimately rooted in misogyny and toxic masculinity. And if you are erasing bigotry from your fictional world anyway, why stop at homophobia? Luckily, this aspect was only prevalent in the first part of the book, so it didn’t feel too present.