Having loved Running With Lions, Julian Winters’ debut novel, How to Be Remy Cameron was one of my most anticipated releases of the year. So I was HYPED when I was approved to review an eARC of this novel through Netgalley.

My fate in life, it seems, is to read Julian Winters’ books in one sitting, and I’m okay with that. They’re just perfect books to read on a rainy (or sunny, because when isn’t a great time to read) Saturday afternoon.

Everyone on campus knows Remy Cameron. He’s the out-and-gay, super-likable guy that people admire for his confidence. The only person who may not know Remy that well is Remy himself. So when he is assigned to write an essay describing himself, he goes on a journey to reconcile the labels that people have attached to him, and get to know the real Remy Cameron. 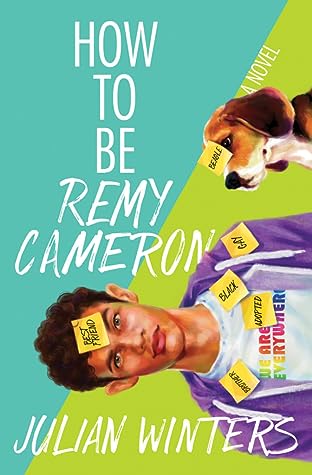 “Who am I? I’m Remy Cameron. I’m the president of the GSA, an older brother, a best friend. I’m black, gay, and adopted. But none of these labels define me.”

Because Remy is different from his peers in a lot of ways, he’s often forced to think about how those identities define him. And this increases when he has to write an essay about who he is.

What I especially appreciated about this book, is how incredibly thoughtful it is. There are discussions of what it actually means to be queer, how the allocishet world views queerness, and how those two things are vastly different. There are explorations about what it’s like to have been out and sure of yourself for a while, like Remy himself is, or to be new to coming out, like the love interest in this novel. And there’s a lot of thought about how you can never really control who others think you are, only what you show the world.

“Over and over, I’ve had to acknowledge my sexuality as if it’s a warning. The thing is, you always have to come out. Every day. To new people, to people you’ve known forever, to people who keep trying to ignore you.”

Another important theme in this book is Remy being adopted. He thinks a lot about how this impacts his identity, and what it means to him personally. In the novel, Remy gets to meet his biological half-sister, and this makes him once again re-evaluate what family means. I’ve definitely read books on adoption before, but I don’t think I’ve ever read one that discussed the topic in such a thoughtful way. I really appreciated this, because while I wasn’t adopted myself, my cousin is, and this gave me some additional insight in what her experience might be like. Like Remy, she too has a younger sibling who is their parents’ biological child, and I don’t think I’ve ever seen that represented in a book before.

All of this might make it seem like How to Be Remy Cameron is a pretty heavy novel, but it’s not at all! It’s a very sweet, fast-paced romcom, with a very lovely romance, as well as amazing family relationships. The explorations of what makes up an identity form an extra layer I really loved, though! This novel will likely stay with me for a long time.

7 thoughts on “Review: Julian Winters – How to Be Remy Cameron”